To have a successful hunt for elk, one of the basic requirements is to be where you want to hunt before daylight. Moving there around wooden rocks and slender paths without making any noise or damaging your leg is a real trick. If you use flashlights that almost defeat your stealthy strategy. 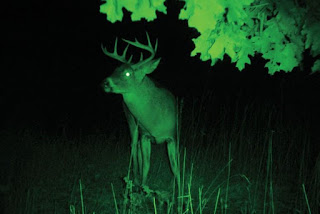 I would like to relate a story a friend told me on how he does it. He ask me to not use his name or give away his favorite hunting location, however he hunts in northern Wyoming. Him and his hunting partner take their families camping on weekends about a month before hunting season. Not only does this give them a chance to scout their hunting area but it also lets them have some real good family time.

Each morning they would get up well before daylight and scout for elk. They found a fair sized park about ¾ of a mile thru heavy timber that almost always had elk early in the morning. On opening day of elk season they were ready This time they didn’t have the family along and they had another advantage they never used before. They were both wearing night vision goggles. Being able to see without flashlights, they could navigate thru the down timber and other obstacles without making hardly any noise. Arriving at their stand on the park they had another surprise. Being able to see clearly they could tell there were no elk in the park. There were however two other hunting parties set up around the park. This was really discouraging!

When they were doing their scouting they found another smaller park about another ¼ of  a mile further back in the timber that occasionally had elk in it. They decided to slip back away from their stand and check the other park. That turned out to be a really good idea. The other hunters had scared the elk  out of the bigger park and they moved to the other park.

My friend said they would never been able to slip thru the heavy timber and get close to the smaller park without spooking the elk had they not been using night vision.  As it was they slipped in, settled down and waited for daylight. They were both able to take a nice elk. This made a really great ending for all their hard work.